Should you pay off your student loans early or invest the money instead? Obviously, if you were one of the lucky ones that took out student loans at the ultra low 2% to 3% rates of the early-to-mid 2000s, you should keep them around for as long as possible, since the interest cost is at or even lower than expected inflation.

However, that situation doesn’t apply to most people anymore. The typical borrower now takes out debt at a 6% to 8% rate directly from the government. Then you might refinance to a lower interest rate when you have a steady job in the private sector.

I’ll look at various combinations of early-payment strategies for borrowers who have the option to pay down their debt faster than the Standard 10-year plan offered by the government.

Should you pay off your student loans early?

Unfortunately, that’s not an easy decision if you want to use math. If you want to use emotion, then yes, if you can’t get loan forgiveness because you earn too much money, paying off your loan early will feel great.

However, what if you put that money into investments that earned a positive return over time? If you earned a high enough return, you’d much rather have less money going toward paying down your debt and more going into investments.

What we’ll find in looking at different scenarios is that if you’re asking about paying your loans off early, you might be looking at your finances the wrong way.

When you can afford to pay down your student loans early

Can you afford $1,000 in extra payments at a $33,000 income? Perhaps, but it will be much more difficult. That’s why you have to be making enough money to live a comfortable middle-class existence and have a DTI ratio below a certain level, otherwise it will be very tough to make a dent in the balance.

Paying off student loans in 5 years vs. 4 years

If you know you won’t be getting loan forgiveness, it obviously makes sense to refinance to a lower interest rate at the same repayment term length. However, what about refinancing to a short repayment term and making extra payments to get rid of the debt sooner?

Pretend you owe $100,000 at 7% and earn $150,000 per year (adjusted for 3% inflation after the first year) and that you’re single. Maybe you’re a nurse on the West Coast at a for-profit hospital or a dentist who got financial help from your parents in dental school.

Assume you have 20% of your income going to loans and investments and that you could earn 5% returns if you invested the money instead. Let’s also assume for the table below that if you refinanced, it would be for a 3.5% fixed rate for a five-year term. Here’s what your net worth would look like as you pay down your debt at the five-year rate: 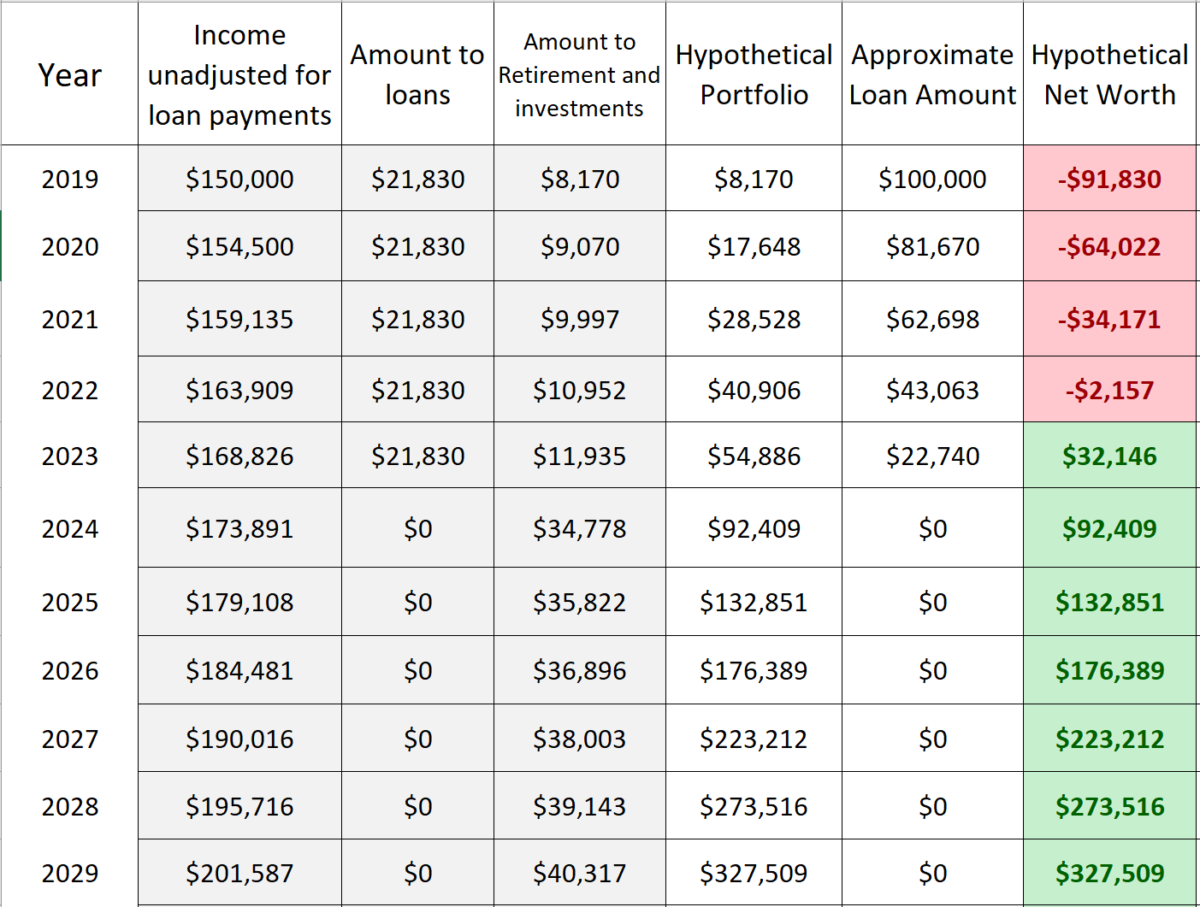 The number I’d look at above would be your $327,509 net worth in 2029. What if you decided you wanted to pay your loan off early at a four-year rate instead of a five-year one?

There would be no reduction in interest rate since you’d be making prepayments on your existing five-year loan with a private lender that would give you a lower rate. 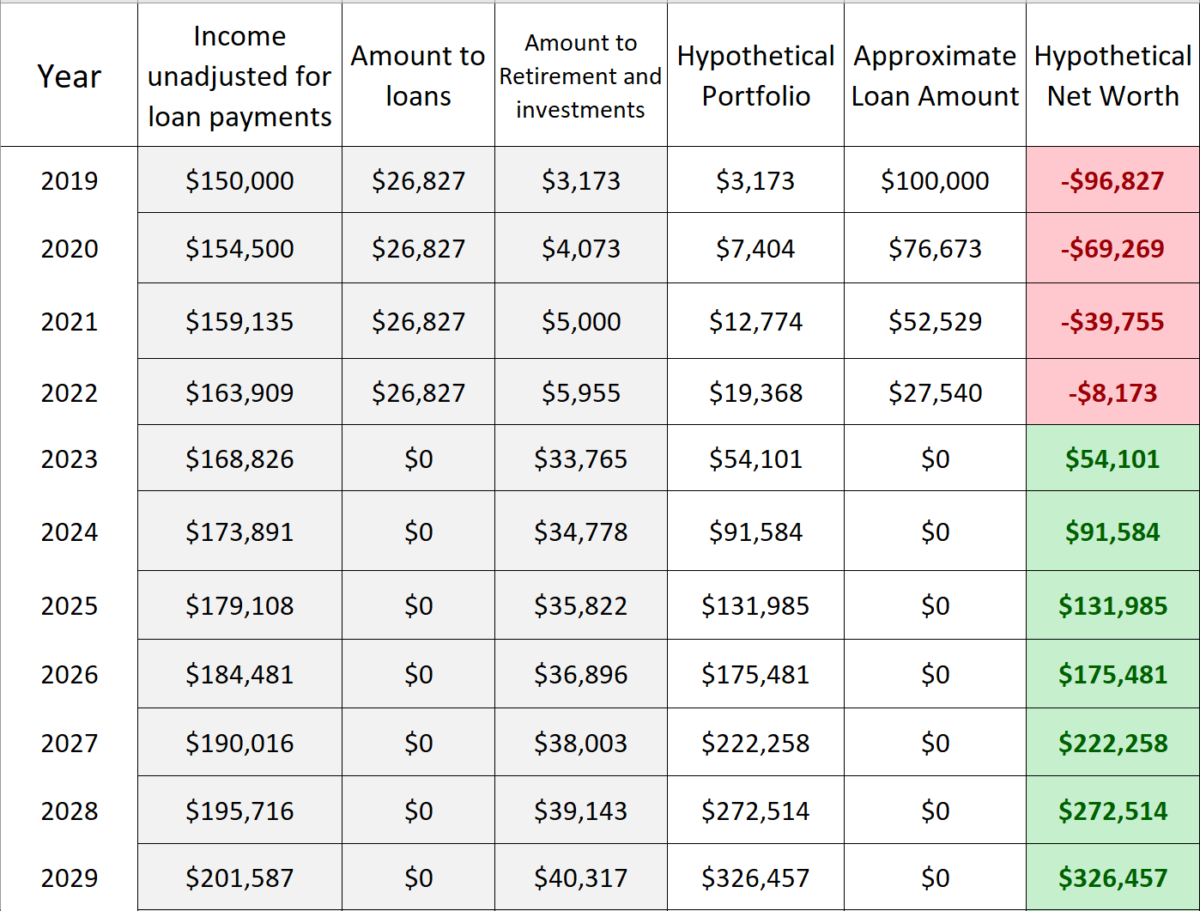 Your net worth now in 2029 — 10 years from now — is $326,457. That’s about $1,000 less than it was when you stretched out paying the debt off for five years instead. That intuitively makes sense because if you could earn 5% on your money, you’d be better off stretching out payments if the interest rate was lower on your loans. 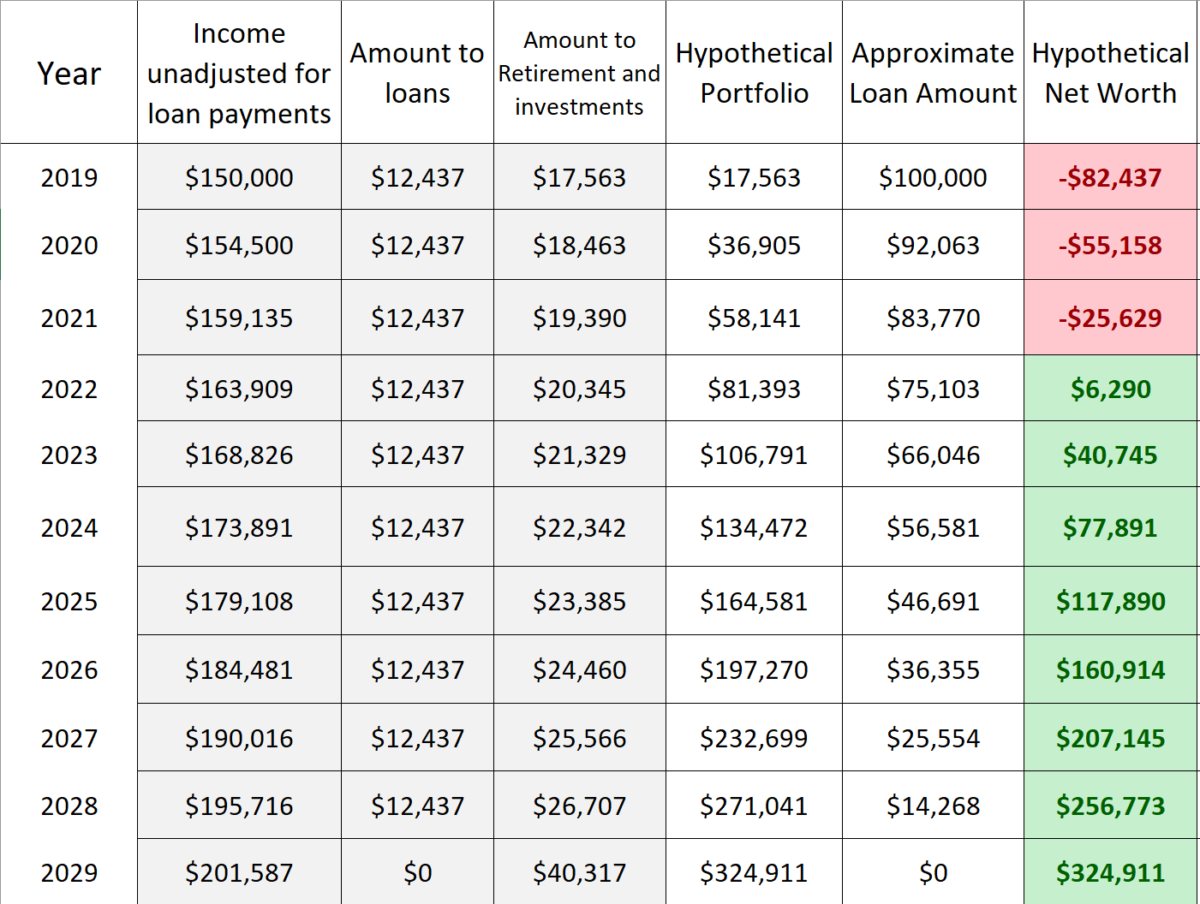 With a final net worth of $324,911, you’d end up richer, assuming a 5% investment return paying off your student loans with the lower-cost, five-year fixed rate.

However, if you assume a higher investment return, the higher interest rate with a longer loan term looks better.

Rather than post entire tables, I’m going to show you what your net worth would be assuming you pay down $100,000 of student loans on a $150,000 income with 20% going to loans and investments.

A couple points to call out in this table. You’ll notice that your net worth is higher in every scenario at higher investment return assumptions within the same repayment term.

When paying off student loans early, your net worth is higher by an extremely modest amount at a 3% investment return in all scenarios.

At a 5% and 7% return assumption, your net worth is lower if you pay your student loans off early. How much lower? Typically only a few hundred dollars on a $300-something-thousand net worth.

In other words, at a low investment return, getting rid of debt fast is the obvious best path. At a moderate investment return, it’s still good to get rid of the debt, but it doesn’t matter as much as long as you do so within four to 10 years. At a high investment return assumption, you’d like to stretch out repayment to about 10 years — but not necessarily longer than that.

In other words, there isn’t a hard-and-fast rule about paying off your student loans early. It depends highly on what interest rates you have access to in the refinancing market and what your earnings projections are for investing.

Why paying off student loans early is such popular advice

In the above table, we assumed the same 20% savings rate for all of those options. That means if you weren’t putting extra payments toward loans, that money would be going to investments instead.

The most-popular advice about debt is that it’s bad and must be eliminated at all costs. Sometimes this advice doesn’t consider forgiveness options, making this guidance even more suspect.

However, in many cases, an anti-debt attitude is best not because of math but because of human emotions and behavior. If we aren’t required to make big debt payments, what are the chances that money will end up in a brokerage account at Betterment or a 401(k) plan? Not very good.

Our average American savings rate according to MarketWatch is only 3%. Why is this rate so low? Because whenever we get an increase in income, it gets eaten away by recurring monthly fees. At best, it lays fallow in some almost-0% checking account somewhere.

When you pay off your student loans early, you have a forced higher savings rate. Once the loans are gone, theoretically you haven’t designed a lifestyle of consumption with that money that went into monthly payments to buy stuff like Ford F-150s and four-bedroom homes.

Instead, you were forced by your debt payments to drive Toyota Camrys and live in two- or three-bedroom houses.

If you can’t benefit from loan forgiveness because you earn too much money and work in the private sector, you should probably pay off your student loans early. Your savings rate is the most important thing in your life, not the fact that you have student debt.

Can you be trusted to stash huge amounts of money in investments if it doesn’t go toward debt? If you can, then by all means pour money into investments. But unfortunately, the data shows that we’re not that good at keeping our savings rate promises to ourselves.

The simple message of becoming debt-free just makes a lot of emotional and behavioral sense, no matter what the math says.

What do you think about paying your student loans off early? If you did it, do you regret it? Comment below!