No profession is 100% “safe” from becoming obsolete; however, finding a profession that is service based and a service everyone needs is a great way to increase your job security.

That’s great news for current and aspiring orthodontists, and the positive job outlook for orthodontists reflects the ongoing need for their services.

According to the U.S. Bureau of Labor Statistics (BLS), orthodontist employment opportunities will grow 7% in the U.S between 2018 and 2028, which is faster than all other occupations’ average.

There could be some cause for concern, though, because orthodontist job openings have decreased by approximately 10% nationwide since 2004 (an average decrease of 1.7% per year); however the need for orthodontists has increased — 3,640 jobs were expected to be filled by 2018.

If the demand for orthodontists continues to rise, more job openings are likely to become available, too.

It’s great that the orthodontist job outlook is positive, but does that mean they won’t earn as much because there’s such a big supply of them?

Not necessarily. Orthodontists’ salary growth will depend on several factors, like location and whether they work in private practice.

A one-year dip does not mean orthodontists’ salaries are going to continue to trend down, but it’s important to understand any service-based industry is prone to income fluctuation. 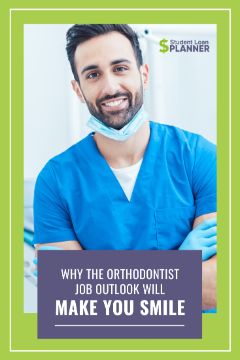 Is an orthodontist job worth the potential student loan debt?

The orthodontist job outlook is promising, and there’s potential to earn a six-figure salary. Good job prospects and a high salary sound like a winning combination, but there’s another factor in the equation for many aspiring orthodontists to consider before heading down this career path: student loan debt.

Becoming a dentist of any kind requires a lot of schooling — undergraduate studies, dental school and then two to three years of training in an orthodontic residency program.

According to the American Dental Education Association (ADEA), in 2017, 85% of dental school students graduated with an average of $287,000 in student loan debt. That means almost every dental student enters their first job owing the high end of orthodontist annual mean salary — and that’s just the average debt.

The average student loan debt for orthodontists that Student Loan Planner has worked with is $617,273.

Many professions that require student loan debt that could reach $1 million probably aren’t worth it if you’re only looking at the numbers because the job might seem like it doesn’t pay enough. But orthodontists’ potential earning power makes it an exception.

The student loan debt is worth it

If you can earn the annual mean orthodontist salary within a few years of graduating from dental school, you could potentially pay down your debts faster than people in other professions.

Plus, there are paths orthodontists can take to earn a higher salary in a shorter period of time, such as:

According to the American Dental Association, the average gross billings per owner dentist in private practice were $1,016,080 for specialists in 2018 ($1,172,830 for orthodontists in particular).

You’ll not only earn more salary as private practice owner, but you can hold on to more of your income by shielding it (legally) from the IRS. Business write-offs will lower your adjusted gross income and, in turn, reduce your student loan payments.

Whether you earn six figures right out of dental school or open your own practice, dental student loan debt can be daunting. You’re not alone in dealing with it.

There are several student loan assistance and forgiveness programs available to help you manage your debt regardless of your situation.

PSLF is a federal program that forgives students’ remaining direct loan balance after they’ve made 120 qualifying monthly payments under a qualifying repayment plan while working for a government or nonprofit organization.

According to the ADEA, many hospitals for advanced dental education qualify as eligible PSLF employers. Your payments tied to income made on direct loans during your residency should register as eligible payments toward PSFL if the hospital qualifies for the program.

The Bureau of Clinical Recruitment and Services in the HRSA within the U.S. Department of Health and Human Services administers this program. The NHSC loan repayment program (LRP) looks for dentists and dental hygienists to provide their services to underserved populations in select Health Professional Shortage Areas.

The initial service commitment is two years and the award amount varies depending on the area where the dentist served, but orthodontists could receive awards up to $30,000 and $50,000.

These Congress-established programs recruit and retain qualified health professionals, including dentists, into biomedical or research careers.

The LRPs are not intended to fund research projects but instead repay up to $50,000 annually of a researcher’s qualified educational debt in exchange for a commitment to take part in NIH mission-relevant research.

The orthodontist job outlook is on the rise

Between the potential six-figure salary, opportunity to open your own practice, increased job openings in the coming years and options to help tackle your student, the orthodontist job outlook is promising.

If you’re considering a career in orthodontics, the advantages currently outweigh the disadvantages.

In terms of job satisfaction, orthodontists also rated their profession favorably when it came to stress levels (below average) and flexibility (above average) and gave it average marks for upward mobility.

If you are hesitant to pursue an orthodontist career because of the potential student debt, book your pre-debt consult today.