According to a June 2019 Bankrate survey, over 45% of Americans now say that they have a side hustle. What’s more, 40% of millennials from the survey said that they earned at least half of their annual income from their side gigs.

The gig economy has officially taken the United States by storm. And with doctors dealing with much more student debt than the average worker, it makes sense that many of them would want to join the side hustle movement.

When physician side gigs make sense (and when they don’t)

From a purely financial perspective, side gigs aren’t usually the best way for physicians to make extra money.

Rather, physicians usually enjoy the best return on their time by moonlighting — taking extra shifts at work or at a different hospital or clinic.

If you can moonlight for a few hundred dollars an hour, you’re going to have a hard time finding a different kind of side hustle to beat that earnings rate. That doesn’t necessarily mean that physician side gigs are a bad idea, however.

Determine why you want a side hustle

You need to decide what your goal is in pursuing side jobs. In reality, you may be considering a side hustle because you’re intellectually curious or would like to pursue other passions.

And, if those are your motivations, a side hustle could be very satisfying. In fact, 27% of the respondents to the Bankrate survey said they were more passionate about their side gig than their primary career.

10 Best Physician Side Gigs to Boost Your Annual Income, Profile or Passion

From an earnings perspective, the best physician side gigs will usually be ones that take advantage of your medical background and knowledge.

And you’ll probably also want to focus on side gigs that have flexible time demands or can be done from home.

Here are 10 popular doctor side gigs worth considering to increase your income, professional standing or your love for what you do:

An ever-increasing number of patients are turning to telemedicine as a more affordable and convenient alternative to traditional doctor visits. According to the American Medical Association (AMA) telemedicine grew by 53% from 2016 to 2017 alone.

From the doctor’s perspective, telemedicine is convenient as well. You can work from home and will often have a lot of flexibility in regard to how many hours you want to work per week.

One of my personal friends has worked for a telemedicine service for over two years now and says that she absolutely loves it.

Chart review (also known as peer review) is the process of reviewing medical records to make sure that patients were given the appropriate medications or procedures. Often, chart reviews are required due to a medical claim dispute when the parties involved need a board-certified doctor who can give his or her unbiased opinion.

The great thing about chart review work is that it’s common for doctors to do it on the side as independent contractors.

If you’re interested in spending a few hours each week doing chart review, you can get started by becoming a member of the National Association of Independent Review Organizations.

Lawyers sometimes will look for medical expert witnesses to give their opinion about medical evidence presented in a case. 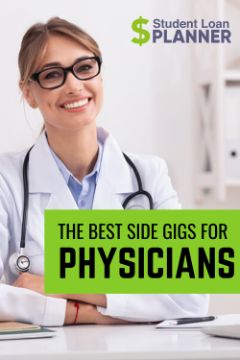 Medical spas (also known as medi spas) have all the things that make traditional spas so enjoyable but with more advanced medical advice and treatments.

If working at a spa sounds a lot more relaxing and enjoyable to you than the hospital or clinic where you typically work, you may want to consider applying for part-time hours at a medi spa near you. Or, if you have the capital, you could consider opening your own medical spa.

As you know, medical schools can be competitive, and students are always looking for ways to get an advantage over other applicants. For this reason, many students are willing to pay for MCAT prep if it can help them achieve a higher score.

Responding to the demand, there are now many MCAT prep courses available online.

Working as a moderator for one of these courses could be an easy way to positively impact aspiring doctors while also earning some extra income. Or, you could create and advertise your own MCAT prep course using a platform like Udemy or Teachable.

Health and wellness blogs love it when they’re able to publish articles from certified physicians because it adds credibility and expertise to their content. If you enjoy writing, consider writing medically focused articles on a freelance basis to build a portfolio of published work and earn some extra money from home.

The Health Journal, Eating Well, and Fitness Magazine, are just a few of the many publications that have been known to accept freelance writer articles. Also, you could advertise your writing services on job sites like Upwork or Fiverr.

Finally, you could consider creating your own blog. As a money-making opportunity, you should typically think about blogging as more of a long-term play. But, ultimately, owning your own site and having complete control over what you write could be the most satisfying.

At various times, businesses, pharmaceutical companies or attorneys need to rely on the expertise of medical doctors.

Twenty-six percent of physicians in the survey said that consulting was their physician side hustle of choice.

If you have the heart of a teacher, why not become a part-time teacher or a professor at a medical school? Though teaching might not be as lucrative as other doctor side jobs, you could find it very fulfilling.

Teaching ranked No. 6 on Medical Economics’ list of the most common sources of secondary income for physicians in 2018.

“Take online surveys,” is a common suggestion on side hustle lists. But, unfortunately for the general public, surveys usually offer a terrible return on time. For doctors, however, taking surveys could actually be a side hustle worth considering.

The great thing about medical surveys is they provide a way to earn a little money even when you only have 20 minutes or an hour of free time. And medical surveys can pay much better than the typical retail surveys you’ll see online.

If you’re interested, Reckner Healthcare, ZoomRx, and M3 Global Research are just three of the many research companies that pay doctors for their opinions.

There are two primary ways that doctors can make money with speaking.

One way is to get hired by a pharmaceutical company to talk to other doctors and medical professionals about the benefits of a specific drug. Another option is to give medical talks to public audiences at community centers or colleges.

A lot of people don’t enjoy public speaking, but if you do, this could be a great way for you to earn money and increase your public profile. This kind of work can result in more offers to speak or write, or it could help you grow your clinic or practice.

Speaking was the fifth most popular source of secondary income for doctors in the Medical Economics 2019 survey.

Physicians’ side hustles are about more than just the money. Due to high earning potential in their primary careers, most doctors should view physician side gigs as hobbies instead of as ways to make more money, although the extra cash could help you pay down your med school loans faster.

But could a physician side gig scale into a full-time job? It’s possible.

You could end up doing so well with one of these doctor side jobs that it can replace some of most of your physician income.

And if it happens to be something that you enjoy more, you might as well do that.