So why is dental school so expensive? If I were to make a murder mystery analogy, the politicians just provided the ax and the dental schools decided to use it.

Examine this infographic from the ADA below showing the revenue per full-time student at American dental schools. At first glance, declining state support pops out like a sore thumb. It’s the favorite talking point of administrators not just in dentistry but in every professional school as to why they had to raise tuition 10% last year.

However, you’ll notice that the decline of state support isn’t nearly as large as the increase in tuition. 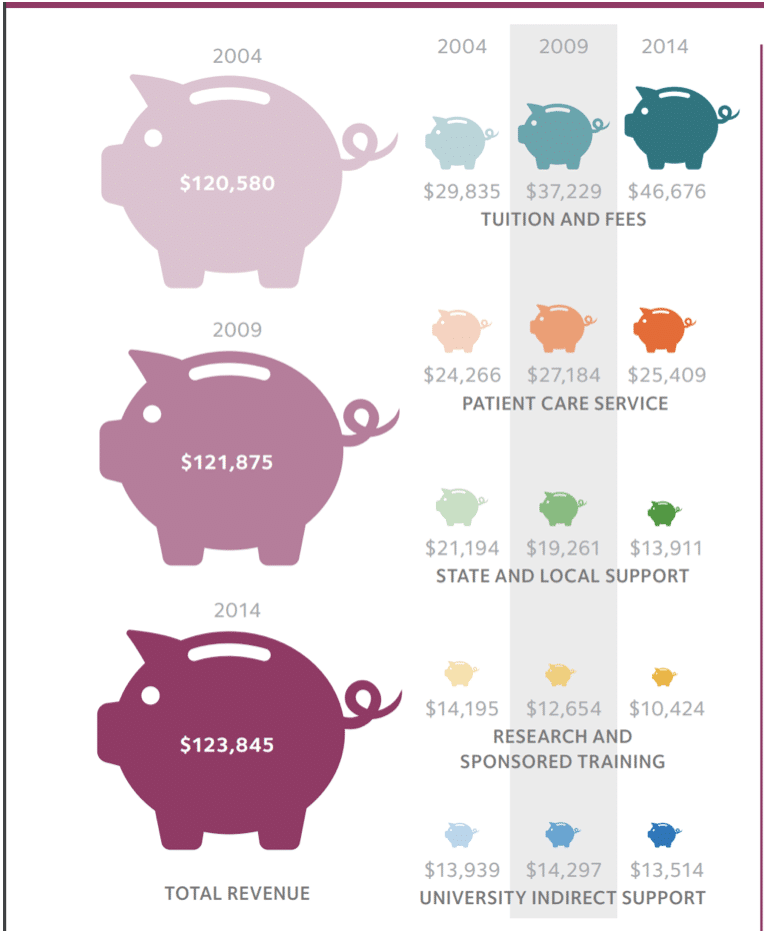 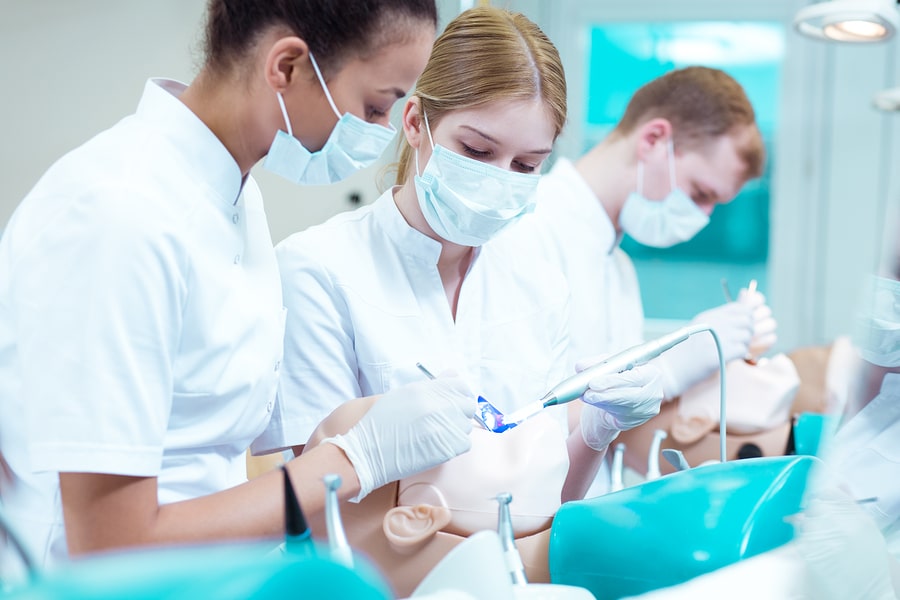 Another less popular but still relevant talking point is that states reimburse Medicaid much less than they used to. To maintain their service to the community, dental schools must increase their tuition revenue to make up for this loss.

However, you’ll notice in the chart above that the loss of patient services revenue is modest.

The only other category that shows up as having a large negative revenue trend is research money. Even then, the combined losses don’t equal the increase in tuition for the average cost of dental school per year.

Declining State Support For Dental Schools is Not True Anymore

When the Great Recession happened, states had to balance their budgets. Unlike the federal government, which can run a deficit, states usually have to have their revenues match their expenses.

When state revenues fell off a cliff, state legislators had to make tough choices as to where cuts should be made. Because so much of health care spending is mandated, higher education was an obvious target.

Look at this graph of the state support to the University of Washington, home to a highly regarded but financially failing dental school. 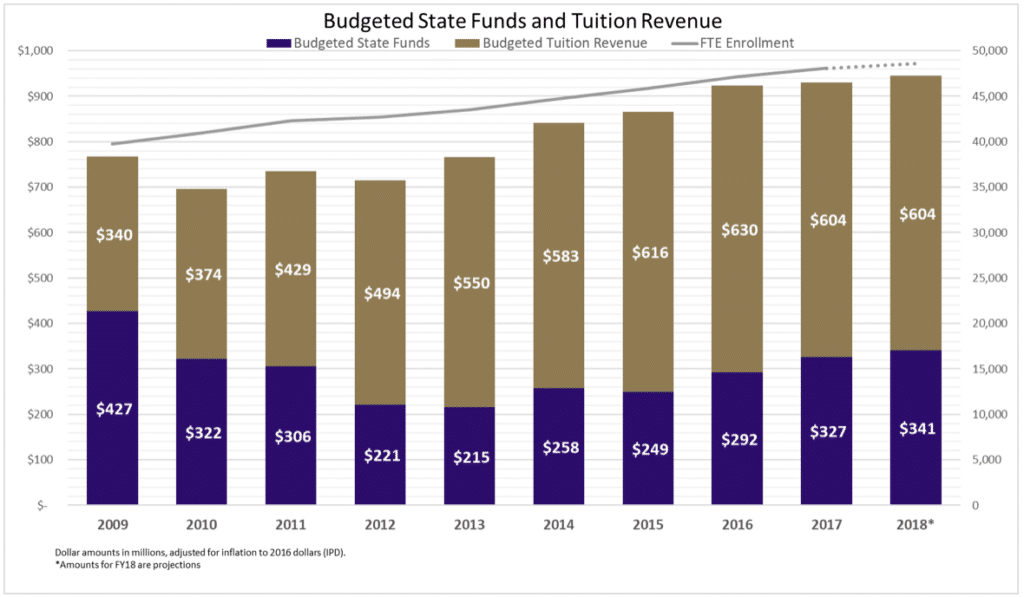 Look at how drastic the fall in state support was from 2009 to 2013. The school lost about 50% of its state support. Even a skeptic like me has to admit that this would be justification for at least some sort of tuition increase.

However, if you keep following the trendline past 2014 where the chart above from the ADA happens to stop, you’ll notice public support for the University of Washington rises back to $341 million. That’s still well below the peak of 2009, but these dollars are adjusted for inflation already so this is an apples to apples comparison.

An administrator could say that they receive less state support today than they did in 2009 in many cases. However, tuition continues to increase at a rapid clip while the state support comes back up.

The only defendable explanation for the continued rise in dental school tuition at public universities would be that university presidents seize this increase in tuition dollars for their more politically important undergraduate curriculums.

We should look at another institution that did a good job of controlling costs to compare this example. I’m choosing the University of Alabama at Birmingham. Take a look at their institutional level state support over the past several years. 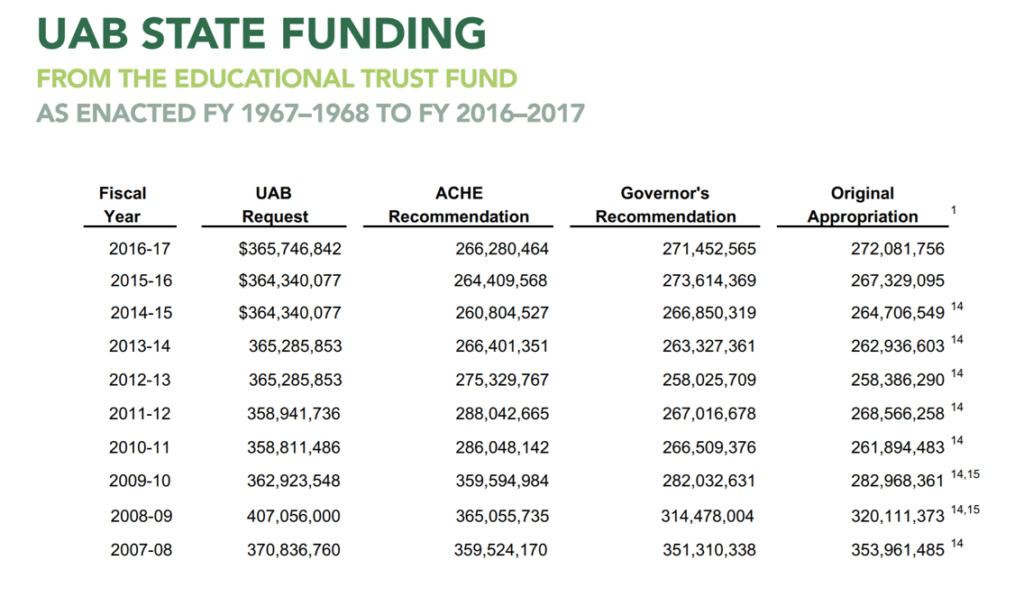 You can see a similarly huge cut in state funding, and UAB’s state support never really recovered in a big way like University of Washington’s did.

Let’s look at how these two schools raised their tuition over the past several years. If the factor of declining state support was the main reason for the tuition increase, then you’d expect a similarly large jump at both institutions.

The earliest data I could find on historical tuition at UAB was back in 2014 when the D1 cost was listed at about $22,000. I used the site Web.Archive.org, which captures historical screenshots of data that used to be listed as a URL.

In contrast, UW Dental School listed in-state tuition at roughly $40,000 in 2014. Now, that average tuition is at over $61,000, according to reliable data at the forum DentalTown.

All Dental Schools are Getting More Expensive, but Some Really Stick Out

We shouldn’t pick on just two public schools. I’ll include three private schools in this analysis too: NYU, Pacific, and BU.

Pacific is a three-year program, which is why the tuition really sticks out. However, it’s clear that while all dental schools are getting more expensive, some like the University of Alabama-Birmingham system have done a fantastic job at keeping tuition under control, even in the face of declining state support.

Others like the University of Washington dental school seem to have been run by an incompetent administration in the past. Currently, the school has a $42 million dollar deficit and is laying off huge numbers of clinical staff.

When your tuition SOARS 58% in 4 years and you’re still having major financial problems, it’s clear that you failed in your job as a dental school dean. I wouldn’t be surprised though if the guy gets to draw a huge pension anyway. Hopefully, state lawmakers who want to audit the finances of dental schools are successful.

I received a response from the interim dean of the school, Dr. James Johnson, who wrote:

I don’t want to waste your time on the tuition matter, as we would be pursuing something that is not the  [sic] problem. I do not think it is wise for WSDA, the School of Dentistry, or anyone in state government to go into the tuition question. We will all look very foolish, if this is pursued, and it will hurt our other very important messages if we question tuition.

What’s the Real Reason Why Dental School Costs are Rising?

Even the sharpest critic of dental schools would admit dental school deans need to raise tuition yearly on average because of inflation. However, over the time in question inflation was roughly 2% annualized, a rock bottom number by historical standards.

I will cede the fact that public universities might have needed to have raised tuition by a bit to address their loss of state funding during the Great Recession. However, if you look at the funding boom before that, states drastically increased their funding to higher ed and universities over expanded and over hired.

That means when state support declined, they should have been able and ready to make big cuts. That’s what the deans at the University of Florida did when I worked and studied there.

After 2014, states started contributing money in a big way again to public universities. Private schools that already charged a huge amount for tuition raised it even more.

The real reason why dental school tuition soars is because you are still applying. It’s that simple.

The Grad Plus program covers all costs above $162,000. Since almost all dental schools cost more than that, dental school deans have no upward resistance against tuition increases since Grad Plus has no borrowing limit.

As long as more students consider the cost vs reward of a dental school education and apply, they’ll have seats. Dental schools can increase tuition with reckless abandon and pursue big capital projects that get them praise and grow the reputation of their schools.

If you’re a dental school dean, you have 0 incentive to look out for students’ interests. You have every incentive in the world to bring in research dollars, raise faculty standards, and grow the reach of your school. If you do a good enough job, perhaps you’ll get rewarded with a university President job.

Dental school tuition will not decrease until the Grad Plus program is eliminated, which means if you’re going to dental school, beware that your tuition will soar while you’re enrolled. Plan on at least 20% higher costs than what the school tells you about.

If you already have dental school debt, we’ve advised hundreds of dentists on the best way to pay it back. I’d love to make a personalized plan for your student loans.

So why do you think dental school tuition and fees have soared? Tell us your opinion below!